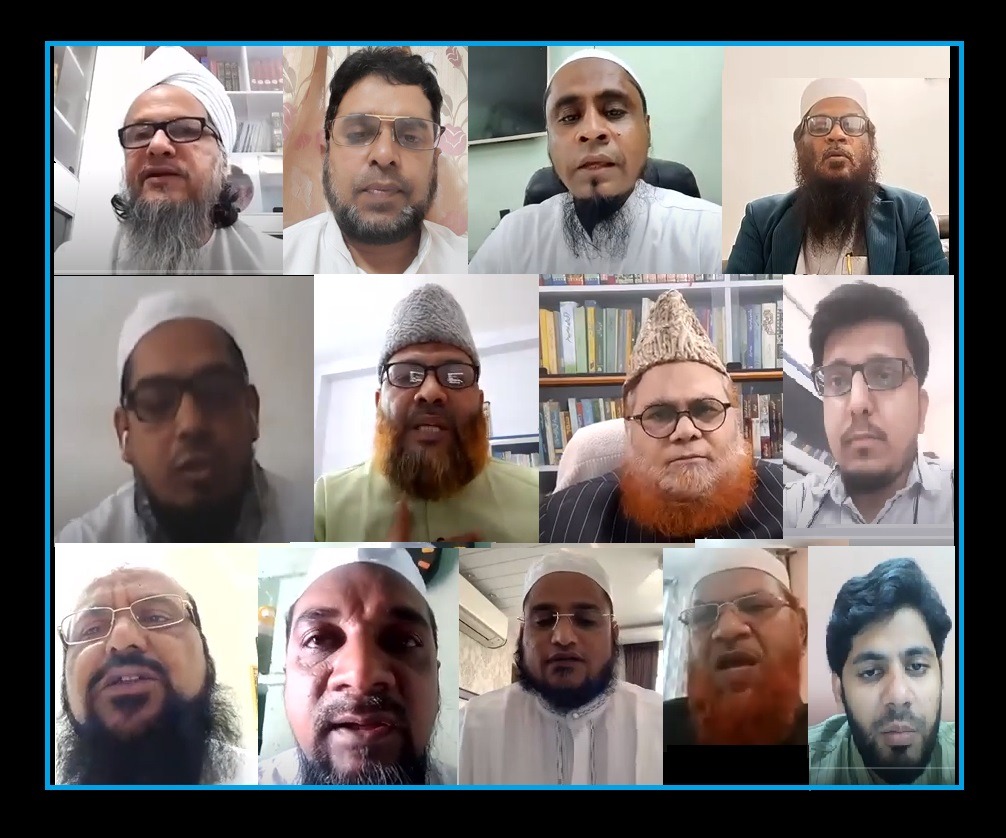 The relationship of the Muslim Ummah with the benefactor of humanity is an essential requirement of love and faith. Respect for the Prophet (peace and blessings of Allah be upon him) and protection of his honor is not only our religious duty but also the guarantor of salvation in the hereafter. The recent publication of blasphemous sketches in France and the heart-wrenching and provocative statements made by the rulers to the Muslims have caused grief and concern to the Muslim Ummah and humanitarians all over the world. It is the responsibility of all of us to share in this outrage as much as possible. In this regard, a special online meeting was held on behalf of Jamat-e-Islami Hind Hyderabad under the chairmanship of Amir-e-Halqa Telangana Maulana Hamid Mohammad Khan Sahib in which religious, national leaders and intellectuals of the nation addressed the gathering.

On this occasion, Maulana Hamid Mohammad Khan Sahib in his presidential address said that the love that Allah Almighty has instilled in the hearts of the Muslim Ummah regarding the Holy Prophet Mohammad (PBUH), is not heard of any other ummah and their prophet. Maulana said that in spite of a numerous tactics of the world, our love for the Holy Prophet (PBUH) is not going to diminish in the slightest. He said that we cannot tolerate the slightest insult in the name of the Holy Prophet (PBUH) anywhere in the world. Maulana further said that we need to spread the message of religion to the world through morality and character. Amir-e-Halqa also said that the enemies of Islam want to extinguish the light of Allah with their blows while Allah will continue to make the deen prevail over the world.

In his inaugural address, Hafiz Muhammad Rashaduddin, Nazim-e-Sheher Jamat-e-Islami Hyderabad, said that the leaders of falsehood want to entangle Muslims in negative activities. We need to understand the nefarious intentions and plans of the enemies of Islam and thwart them.

Amir of the Emarat-e-Millate Islamia Maulana Hussamuddin Sani Amil Jafar Pasha said that we all need to respond to the attacks of anti-Islamic forces with unity. “We cannot tolerate such harassment,” he added.

Maulana Ghias Ahmed Rashadi said on the occasion that we need to disseminate the teachings of the Holy Prophet (PBUH) in regional languages.

Dr. Asif Umri of Jamiat Ahle Hadith said that the basic teachings of our religion is peace and tranquility. He said that we should become a true model of Islam and spread the teachings of Islam.

Maulana Tanzeem Alam Qasmi said that in order to protect the honor of the Prophet, all religious parties and scholars need to unite and fight against it.

Dr. Talha Fayyaz-ud-Din, President, SIO Telangana, said that protesting on such an occasion is a sign of warmth of faith. Mufti Abrar in his address said that it is the religious duty of every Muslim to at least condemn such attacks while it is the responsibility of Muslim rulers and Muslim countries to repel such attacks.

Dr. Muhammad Fahim Akhtar Nadvi said that those who are making fun of religion today, Allah will surely disgrace them in this world and in the hereafter. He further said that we should take measures to quell the tribulations of these enemies of Islam.

Maulana Mufti Zubair, General Secretary, Jamiat Ulema-e-Hind, Telangana and Andhra Pradesh said that hurting and playing with the feelings of people is in fact a form of terrorism.

President SIO Baradar Abdul Hafeez said that today there is a need to respond to the movements of these enemies through social media as well.

Dr. Siraj-ur-Rehman said that the two important responsibilities of Indian Muslims today are to convey the message of Islam to the brothers of the homeland and to educate and train the new generation properly.